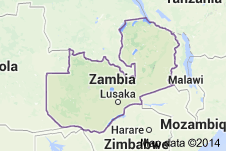 Zambia is a inland country in Southern Africa. Its neighbouring countries are the Democratic Republic of the Congo to the north, Tanzania to the north-east, Malawi to the east, Mozambique, Zimbabwe, Botswana and Namibia to the south, and Angola to the west.

The capital city is Lusaka, located in the south-central part of the country. The population is concentrated mainly around Lusaka in the south and the Copperbelt Province to the northwest.

The Zambian government is pursuing an economic diversification program to reduce the economy’s reliance on the copper industry. This initiative seeks to exploit other components of Zambia’s rich resource base by promoting agriculture, tourism, gemstone mining, and hydro-power. In recent decades, the population of Chinese people in Zambia has rapidly increased.